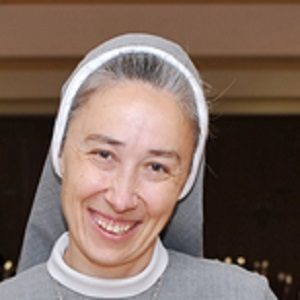 Sister Weronika was born in 1973 in Wrocław. She grew up in the town of Henryków, 53 km from Wroclaw. She graduated from the High School in Ziębice in 1992 and joined the Missionary Sisters of Christ the King for Polish Emigrants in Poznań-Morask. In 1995, after completing postulancy and a two-year novitiate, she made her first religious vows and in 2000 she made her perpetual vows. From 1994 to 1999, she studied at the Organist’s College in Poznań. Then she was sent by the Congregation to the master’s studies at the Catholic University of Lublin in Lublin, where in 2004 she graduated from the Faculty of Church Musicology. After graduating, she left for apostolic work in Chicago, USA. She worked there for 3 years in the parish of St. Jack until 2007.
Then, at the invitation of the Oblates of Mary Immaculate in September 2007, she began working in the parish of Saint. Kazimierz in Toronto. She is the organist and works as a catechist, preparing children for the First Holy Communion.

Sisters Missionaries of Christ the King

is a missionary congregation that was founded in 1959 by Father Ignacy Posadzego. The heart of the charism is the Poles leaving their native country and living in various corners of the world. The slogan in the coat of arms of the “Everything for God and Polish diaspora abroad” accompanies daily work with countrymen around the world. The apostolic work of the sisters varies, depending on the Polish community in the given country. Currently, 100 Missionary Sisters of Christ the King work in Polish communities in various countries around the world. They fulfill their mission in Australia, Brazil, the United States and Canada, Great Britain, Belarus, Belgium, Germany, Hungary, Greece and Italy. They fulfill their apostolic mission by working with children and youth, catechizing, learning the Polish language, running various pastoral groups, children’s and youth groups, reviving spiritual and liturgical life in parishes. They join the care of the families of immigrants, the sick, the elderly and the lonely Poles. They also serve in parishes, acting as organists and sacristans, and work in parish offices.

In the parish of Saint. In Kazimierz, Toronto, the sisters began their work in 2006 at the invitation of the Oblate Fathers of Mary Immaculate. Sister Weronika is currently working as an organist in the parish. The sister also catechizes and surrounds pastoral care of parishioners.