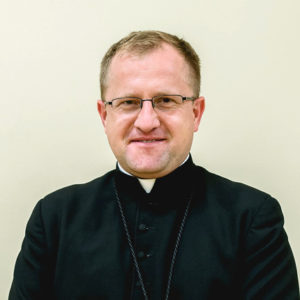 Fr. Wojciech was born on June 12, 1979 in Brzesko, in the diocese of Tarnów. After graduating from elementary school in the home town of Iwkowa (Lesser Poland), he began his studies at the Lower Seminary of the Missionary Oblates of Mary Immaculate in Markowice.

In September 1998 he began his novitiate at the Holy Cross. On September 8, 1999, together with a group of confreres, he made his first religious vows. As a deacon, he held a three-month pastoral internship in the province of the Assumption of the Blessed Virgin Mary in Canada, where he was appointed to work after graduating from the seminary and receiving the priestly ordination on June 21, 2005. The parents of Father Wojciech and three sisters live in Poland. His interests include tourism, sport (soccer, hockey) and history.