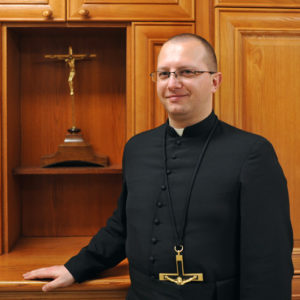 Father Paweł was born on March 29, 1982 in Lębork and raised in Nowęcin near Łeba in the north of Poland, very close to the Baltic Sea. After elementary school, he entered the Lower Seminary as a secondary school and obtained a high school diploma there. After graduating from high school he went to the novitiate on the Holy Cross (Swietokrzyskie Mountains). He made his first vows on September 8, 2002, and immediately afterwards began the Higher Theological Seminary in Obra.

After perpetual vows (5 years later) he wanted to go to Ireland to be with Poles who went abroad to work. Then he was ordained a deacon (May 26, 2007) and priestly ordination (May 31, 2008). In the meantime, the superiors decided that instead of going to Ireland, he had the option of going to Canada, which he agreed and flown to Toronto on July 5, 2008.