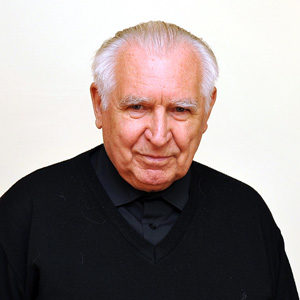 He was born on October 23, 1937 in Rawa Mazowiecka. In the years 1954-1959 he studied at the Major Seminary in Warsaw, as well as at the Faculty of Theology at the Academy of Catholic Theology. After receiving the sacrament of priesthood on June 26, 1960, for the next 10 years he was a vicar in the parishes of the Archdiocese of Warsaw. In 1970, he joined the novitiate of the Oblates of Mary Immaculate on Holy Cross. Then he worked as a curate in the Oblate churches in Gorzów Wielkopolski, Wrocław and Lubliniec (chaplain of hospitals).

In the years 1980-1993 he was a secretary in Madagascar. He returned to Poland for two years to find himself abroad again – this time in France, where for the next two years he served in the Polish parish of Saint. Stanisław Biskupa in Marles-les Mines. In the years 1997-2005 he helped Saint. Jack in Ottawa, and since 2005 in the parish of St. Kazimierz, where since 2008 he has been a resident.